Funky headache when I woke up this morning, probably from the taco b last night.

Work went by rather quickly. Also got some gym time in. Pretty successful day.

Yesterday, I spent a good chunk of hours grinding away at medal, putting some blood sweat and tears into my DIY guitar pedal. Actually, I spilled no blood, and I only cried when I saw the final product :-P I got the 250+ kit from B.Y.O.C. (actually was a gift for my b-day) which comes with a bare aluminum enclosure.

My goal: Polish the top and bottom of the stomp box to (near) mirror finish.

Tools needed for the job:
-Something that you want shiny (needs to be non-anodized)
-Wide range of sandpapers (I personally had 200, 320, 400, 1000, 1500, 2000, and 2500)
-Hard surface, like a chunk of wood or some relatively flat paneling
-Water
-Gloves
-Metal Polish (I used Mother's Mag & Aluminum Polish)
Optional:
-Dremel high speed rotary tool
-If you are Dremel-ing, highly recommend safety glasses

So how exactly does one go about getting some metal from dull to shiny? Lots of patience and elbow grease. I've done a little bit of searching around the internet for information on how to do something like this, but a lot of tutorials expect you to have big fancy tools. I don't have that, and I don't have the space for some of that stuff.

Here's the basic process.
1. Clean off the surface you'd like to polish with water and soap
2. Starting with the lowest grit, then gradually working up to higher grits:
A. Place sandpaper on hard surface, abrasive surface side up
B. Wet down the sandpaper
C. Place object with surface you want to shine against the sandpaper
D. Move object back and forth until all areas of surface appear to have the same "grain" and are smooth
E. Repeat all parts of step 2 EXCEPT each time you start using a new sandpaper, rotate your grinding motion (or rotate the piece) by 90 degress. Also be sure to rinse everything often.
3. Clean off everything by rinsing with water
4. Place some metal polish on the freshly sanded surface, and polish away.

There are a couple reasons to do the 90 degree rotation between grit levels. First off, if you visualize the surface as mountains, you grind away most effectively if you cut across the peaks and valleys. For instance, if these vertical lines are the peaks...
| | | |
| | | | <= grind them away this way =>
| | | |

Another reason to do the 90 degree rotation, you can actually see the difference between each level of sandpaper. You can see all the spots that have not been ground away from the previous grit. I'll show you in a little bit.

Now, the pictures. First up, this is what I started with. This is pretty much untouched aluminum. I have no idea how this was machined or created, but it looks pretty terrible. Even if I was going to paint it, I would highly recommend doing some base sanding, then priming, then painting, then clear-coating... but we will save that for another blog :-D 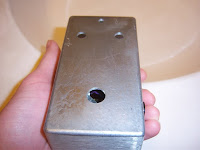 Here I tried to show that yes, the paper needs to be wet. It's called wet-sanding. Not only does it help keep metal dust particles from flying into the air, but it actually sands a bit more uniform since the particles can just wash away. 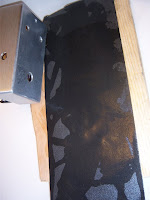 This is the results of the first level of sanding (200 grit). This part took the longest. Essentially, I converted some random gross surface to a uniform surface. You will want to spend the most time in the lower grits since they are most abrasive (they do more to the surface). I promise you, take your time in the first couple stages of sanding, and it will pay off later. 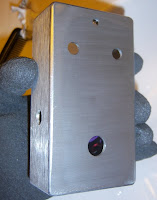 The next couple pictures show the 90 degree rotation I was talking about earlier. It's kinda hard to get a picture of this, but hopefully you get the idea. With the 200 grit (pictured above) the "grain" of my sanding was left-and-right. When I started the 320 grit, I started grinding away up-and-down. This hopefully shows how you slowly grind away at the peaks and valleys left behind by the other lower grits. 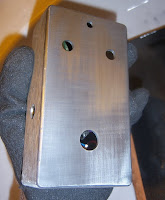 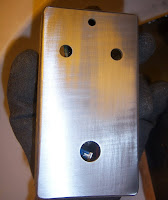 I'm pretty sure my camera started crapping out, and writing over it's own pictures or something. I've taken over 10k pictures with it. Anyway, this next picture is what things looked like after completing 400 grit. I did 200 grit with left-right orientation, then 320 grit with up-down, then 400 with left-right. Also, you can see that the metal is still a bit wet, but the lines from the "grain" are starting to become less prominent. 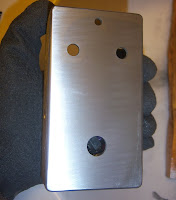 Here are the results after 1000 grit (up-down). You can see that some areas look a little off. I think the jump is too large between 400 and 1000, since this step took me quite a while, and didn't come out as well. 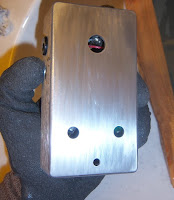 Back to the left-right with 1500 grit. You can see some micro-scratches in the middle. These happened because of the way I pulled off the piece from the sandpaper (see how tiny things can make a big difference now). Don't worry too much about micro scratches, remember we have the polish on our side. 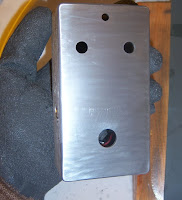 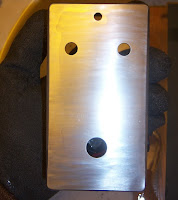 Here is the metal polish I ordered. I think the Texas heat heated it up pretty well, because when I first opened it, it spilled all over my pants. Not cool. Later when I used this, it was more of a paste. It worked well regardless of state it was in. 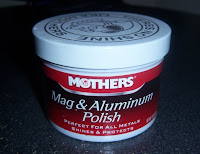 I did not take any pictures of the polishing process. I personally used a Dremel tool with one of the polish heads. I used it at the slowest speed possible too. The polish goes from white to dark-grey/black when it is doing its job. If this doesn't happen, something is wrong (that is what the container says :-) ). Things get really messy when you fling polish everywhere, so be careful and use eye protection. Enjoy the final pictures... ooo shiny. 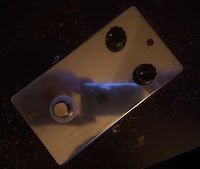 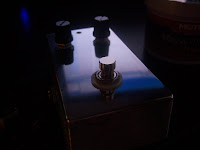 If you have any questions, of if you need me to clarify something, just leave a comment. Also, I take no responsibility if you hurt yourself, or destroy your clothes or guitar pedal.
Posted by AndySk8inMan at 06:36

"I'm pretty sure my camera started crapping out, and writing over it's own pictures or something."

Or maybe the flash card is crapping out?

I read the whole thing, be proud :)

It could be the memory card. If there is a way to prove it somehow, I still have the warranty information for it in which I could get a replacement.

I still feel like it's the camera. Sometimes even though the setting says the flash is on, the bulb barely blinks. Also, when browsing through photos it will randomly freeze, resulting in me having to pull out the battery.

Considering how long I've had it, and how many pictures it's taken, I'm proud of it.

Your style is unique in comparison to other folks I've read stuff from. Thanks for posting to let us know how to assemble the guitar pedals,cool!do you have some video to show me more details about this process,i am a guitar beginner and want to learn something about that! thanks!

Thank you Andy for your details article about Polishing Aluminum Guitar Stomp Box Pedal. You described everything very clear here.
I got many informations i was looking for on the web.
This blog is really helpful to me.

Good read! I must talk about the way you’ve organized your ideas and thoughts on Polishing Aluminum Guitar Stomp Box Pedal. I think you can help us even more by adding some more relevant insights into the topic. However, the post still gives us a head start to the next update to our website Sandersreview. Thank you!