I fell behind on my blogging.  Took multiple months for somebody to say something (thanks Kelc) then another month or two for the next person to notice (the Happy Couple™).

I don't really blame anybody for not reading anymore.  My writing slowly transitioned into a really monotonous, almost robotic, data collection.  The only nice thing about being boring-and-diligent was that I could search back through the blog to figure out when something happened, or where I have been.  That's great... if I actually went places and did things.  Soooo yeah I've been pretty boring lately.  I feel like I'm getting old.  Things just don't sound fun anymore, or worth the effort.


Now, to turn things into something a bit more engineering-like.  I spent a majority of the year using a time tracking application on my old-school smart phone.  This is a pretty cool little app, as you can make tasks and sub-tasks, helping to organize everything.  It actually works out really well for the way things happen at work. To be a bit more precise, I tracked between March 2nd and December 31st (304 days, or 7296 hours).

First up, I spent 2371.5 hours in bed.  Now that isn't necessarily sleeping time, as I tend to watch some TV or play a little on the phone before getting tired.  This averages out to about 7.8 hours every night, not bad. 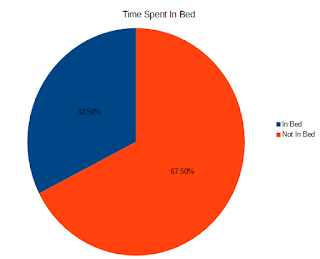 If I'm spending 7.8 hours in bed every day, then that means I have 16.2 hours to work with for the rest of the day. Turns out, on average I spend over an hour every day driving.  Yuck.  There is a huge category of "unaccounted", which is a polite way of saying that I wasn't tracking anything during this time.  I know for sure that some of that unaccounted time should be in the work category, but fell out probably due to me deleting projects/tasks in the program.  There are also times when I forget to start tracking when starting to commute, exercise, or doing homework for short periods of time.  This pie graph is a mediocre visualization of where my time goes, but spreads everything across the entire time period.  For instance, my work time tracked likely falls only between Monday and Friday, but the below graph showing ~36.6% would have you believe that I spend ~5.93 hours every day working, which obviously doesn't make sense.  Similarly, yardwork is usually a chunk of time just spent on Saturday xor Sunday. 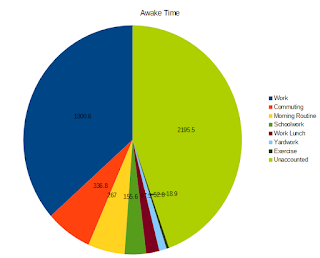 If anybody wants other analysis of the data, just let me know what you would like to see and I'll make it happen.  The "unaccounted" category is pretty alarming to me, as it definitely does not feel like I have that much free time.  Maybe I can track time spent on various forms of entertainment.  I definitely waste time surfing the internet, playing video games, and watching tv/movies/netflix.  Who knows, maybe that time will go to a pet.

I need an Apple compatible time tracker. Your graph makes me really interested in my own use of time. I'm not shocked by your "unaccounted" time when you think about everything you have leftover that doesn't have it's own category. I'm surprised you didn't track "school" time.